On February 26, 1820 the First Baptist Church of Aurora was founded with six charter members: Jesse L. Holman, Timothy Brown, Lydia St. John, Sophia Brown, Sallie Brown and William Hancock. Elder James Dicken was called as pastor, receiving a monthly salary of $1.25. The first worship services were held in a log house, which was built for a private residence on Fifth Street. Between 1825 and 1828 (next door to the log house) the Baptists built a brick meetinghouse, which had a small belfry. A triangle was used to summon people to services until a bell was purchased.

This bell was later used as the ferry bell. The church membership continued to grow spiritually and in numbers, so in 1848 a new church building was built on the other side of Fifth Street. A new bell weighing 1,800 pounds was purchased by citizens exclusive of the church members and hung in the belfry of the new church. This location was the home of the Baptists for over 25 years, and they sold it to the German Reformed Church, which later became the First Evangelical United Church of Christ. (Today in 2002 this church is the oldest church building in Aurora and worship services are held there every Sunday.)

The Baptists built a new church on Main Street, and moved into it in 1874. This was a large beautiful building and became a landmark in Aurora, and considered one of the best-built churches in this part of Indiana. The great flood in January 1937 damaged the church and then in June 1937 the church burned and was too badly damaged to save so the large spire and the rest of the building was torn down. For over a year after that the church met in the Palace Theater, until another beautiful church building was built at 304 Fourth Street, and dedicated in September 1938.

As in the past, our congregation had grown and was in need of more space. In 1999 twelve acres of land on Blair Road was purchased as the site of a new church. Our "Share the Vision" project was a larger church building with a large parking area and space for outdoor activities. In October 2006, members of the congregation moved into the Christian Life Center to worship the One who has guided us through the years. In 2010 we moved upstairs to our completed auditorium! 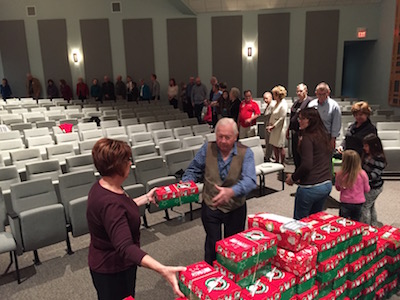 Passing the hundreds of boxes for Operation Christmas Child from the front of the auditorium to waiting vehicles.

Sometimes we forget that the Church by New Testament definitions is not made of glass, wood and stone, but is made up of people. The walls of the true Church are the walls of our hearts, and it is within us that God dwells. Throughout its history this church has met in several buildings, but it has been God's presence in the people that has made the difference. Standing together as a Church, we are bound by the Spirit of our Lord. In the past are many wonderful Christians, who labored so that we might have the opportunities we now possess. With opportunities come responsibilities, for the things we do in the present, and for the generations to come.

Our church family is dedicated to provide for the community a place for you to Love, Share and Serve CHRIST. In the words of our present pastor, Rev. Bill Secrest, "My most fervent prayer is that we will keep our eyes focused on the Lord so that we do not miss an opportunity to serve God in our church and community."

We thank God for all that He has given us. We remember our church beginnings and the purpose of our church "for the propagation of the Gospel and the building up of Christ's Kingdom in the vicinity".